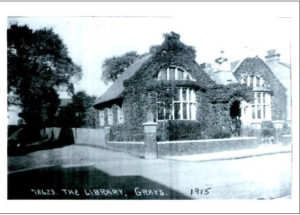 The Thurrock Council has plans to dispose of the Thameside complex which houses the library and museum. Here is a brief history of the library based on the museum’s heritage file.

The history of Grays Library dates back to November 1893 when the Local Government Board appointed a committee to consider establishing a Public Library Service. The first Library was situated in Grays High Street. By 1902 the Library was becoming short of space and the library committee decided to write to Andrew Carnegie, appealing for a donation towards the cost of building a new library building.

Carnegie was born in Scotland in 1835. In 1848 his family moved to the United States, and settled in Pennsylvania. When he was 65 he sold his steelworks to J.P Morgan for $480 Million and devoted the rest of his life to Philanthropic activities. One of Carnegie’s life long interests was the establishment of Free Libraries available to anyone as a means of self-education. The project was started in 1881 and he eventually spent over $56 Million and established 2,509 libraries throughout the world.

A reply on 23rd June 1902 said that Carnegie was willing to donate £3,000 provided a site could be found. Charles Seabrooke and his business partner Mr Astley of Seabrooke’s Brewery donated a piece of land in Orsett Road where the present Thameside Complex is now located. A local architect, Christopher Shiner, designed the new Library. The Countess of Warwick opened the Library on 11th November 1903. The cost of the building was £2,591.15.0. The turret clock had been presented by the school children of Grays; this clock was salvaged during demolition and is in the care of the local museum service.