The main excavation at Mucking began more than 50 years ago and continued for 13 years. Thousands of people took part including many members of the Thurrock Local History Society. However, for various reasons, the full excavation report has not yet been published. Initially, Margaret Jones, the excavation director, felt that it was more urgent to proceed with the dig, ahead of the gravel extraction, rather than spend time preparing the results for publication. Subsequently, the sheer scale of the task, the lack of funds and in due course the death of many of the key figures made publication a slow process.

The site atlas and a report on the Anglo-Saxon settlement were published in 1993 and the report on the Anglo-Saxon cemeteries appeared in 2009. A great deal of information on Roman and earlier periods has been deposited in the Archaeology Data Service web site. In view of the dramatic changes in the approach to archaeological reporting, a deliberate decision was made to draw a line between the previous publications and the final two reports. These are “more scrap-book like” and include interviews with surviving participants. At the end of 2015, Oxbow books published the first of two volumes entitled Lives in Land – Mucking excavations. The Roman period is expected to be published in August 2016. 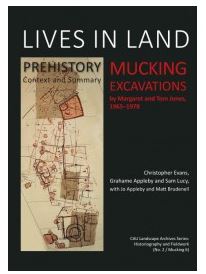 These two volumes will cover both the detail of many important structures and assemblages and also provide a comprehensive synthesis of landscape development through the ages. This includes settlement histories, changing land-use, death and burial, industry and craft activities. Volume 1 takes us from the Mesolithic, through the Bronze Age into the Iron Age. This volume also discusses the methods, philosophy and archival status of the Mucking project given the organisational and funding background at the time. The authors talk about the fundamental changes in archaeological practice, legislation, finance, research priorities and theoretical paradigms which have taken place since the dig began. This volume is available from Oxbow books, currently at the special price of £30.