Despite the fact that the Mucking excavation began more than fifty years ago, until recently, there has not been a full publication of the findings. The site atlas and a report on the Anglo-Saxon settlement were eventually published in 1993; the report on the Anglo-Saxon cemeteries appeared in 2009 and the findings from the Mesolithic, through the Bronze Age into the Iron Age were published at the end of December, 2015. The final report on the Romano-British settlement and cemetery was published in September.

The Mucking excavation has rightly been given a prominent place in the archaeological literature of the last fifty years. However, as the authors point out, Mucking’s findings on the Roman period have been somewhat overlooked. The latest volume will perhaps redress this neglect. It is has greater similarity to a conventional excavation report than its predecessor (Lives in Land, 2015) although it does provide an abridged version of the background given in the earlier volume. This volume contains detailed analysis of finds, photographs, maps, charts and interpretation from the Romano-British period. Although most of the illustrations are of the finds, there are a few photographs that show the excavation in progress and particularly its proximity to the continuing gravel extraction.

This book is not cheap. It is priced at £40 on Amazon. However, it is essential reading for anyone who wishes to read firsthand the evidence that was dug up on that windy hillside half a lifetime ago. It is sad that so many who worked on the dig are no longer around to read the report. 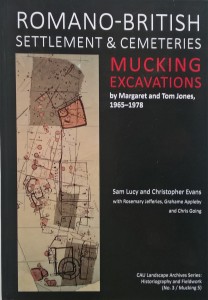 The cover of the latest (and last) volume