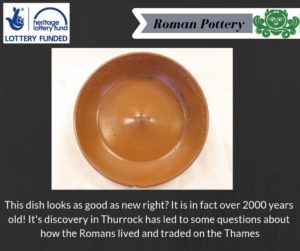 In February and March 2019, Thurrock Museum held a vote to decide which object from their collection would be featured in a travelling exhibition. One of the candidate objects was a Samian ware dish found on the Thames shore at Tilbury.

The Thames became tidal at Tilbury during the Neolithic. At that point or shortly after, a natural salt marsh was established, replacing the previous woodland landscape of oak, alder and hazel. This salt marsh was exploited during the Bronze and Iron Ages for salt making and (probably) fishing and grazing.

The Tilbury marshland was sufficiently remote that it attracted at least one hermit – Thomas the hermit was there in 1161. The hermitage was eventually suppressed by Henry VIII in the 1530s, although it is not clear whether there was actually a hermit continuously on the site throughout the period from 1161 until 1540.

However, between the early and late Roman period, the river level dropped by about 1.5 metres. Since by this stage there was a mature salt marsh that only flooded at the highest tide, a drop of river level of this magnitude took the marshes well above the level of the high tide. These 3rd century water levels, significantly lower than now, made it possible to establish a settlement in what later reverted to salt marshes. This permitted prolonged occupation and probably arable farming.

Evidence for a Roman settlement in Tilbury was found while the docks were being built. The archaeological evidence illustrates life during the Roman period. Roman tiles and pottery, with bones and food refuse, oyster and snail shells, tiles and flint blocks were all observed. These finds were on a “mossy and grass-grow surface” at a depth of 7 feet (just over 2 metres). This is almost exactly the depth at which Devoy notes a peat layer which he dates to 1750 BP (roughly AD 200). Peat is not produced in a salt marsh. Romano British occupation of the marshes is supported by Jonathan Catton who noted that in 1920, 3 hut circles (dated to 1st or 2nd century AD) were discovered on the East Tilbury foreshore below the current high water mark. Unfortunately, the location is now lost under a land fill site.