Between Lockdowns the Conservation project at Thurrock Museum was completed! It was made possible thanks to support from the Land of the Fanns Community Action Fund. The Museum remains closed, but Susan Yates (volunteer at Thurrock Museum) was able to review the work. Read her report here:

Whilst Covid has undoubtedly been a bad thing some good has come out of it at least. Thurrock Museum were able to obtain the services of professional conservator Hazel Gardiner. It was hoped that at least 12 display cases would be treated by the Conservator. In fact Hazel managed to do 20.

Many of the display cases had become infected with a small bug which has now been removed, as has the cause of attracting the bug. Cleaning alone of the interiors of the display cases brightened and improved vastly the contents and the way in which they are portrayed. The woollen felt material used to line the display cases is now much brighter and the colours much stronger enlivening the displays concerned enormously. In the display case for Stone Age Axes the axes had previously been displayed attached using adhesive to a circular black backing. The adhesive was damaging the backing and making the axes insecure so it was decided to clean and remove the board and design a new display where the axes were not fixed with glue of any kind in fact the axes are displayed freestanding. In other display cases items were used that insects infesting found very tasty and as a result damage was done. This was treated and cleaned and once again conservation improved the exhibit.

Another display case that was treated contained loom weights. Unfortunately the sand they had been seated upon was the same colour as the weights and therefore detracted from the artefacts themselves. Removal of the offending detritus has allowed the weights to stand out more once again improving the display as can be seen in the photo below: 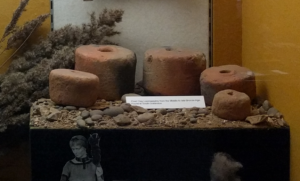 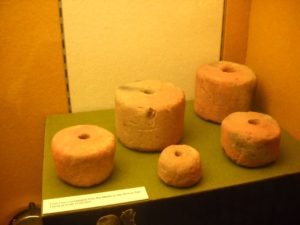 In the display case for the Police Force a silver police whistle was discovered hidden at the back by other items this was cleaned and now sits gleaming at the front of the exhibit and is now very hard to miss. 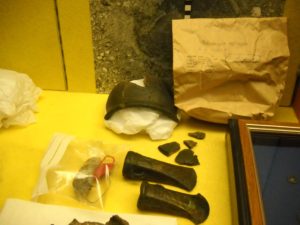 In the display case illustrated above containing Bronze Age and Iron Age artefacts, at the rear can be seen a damaged pot partially reconstructed. Closer examination only possible due to Hazel’s work revealed decoration on the exhibit. It has now been decided to bring this item to the fore making its decorative work more easily visible.

What surprised a lot of people I think was the amount of damaged done by insect infestation. We all expected to see fading of the colours of the woollen backing felt. The photo below shows how the colour had faded. 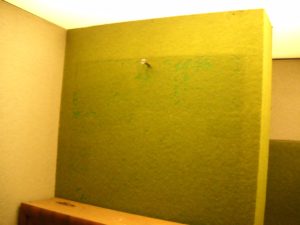 The above photo also shows the damage done to the woollen backing felt by the insect infestation. Thanks to Hazel’s hard work the infestation has now been treated and items will be displayed more effectively.

The museum has also been fortunate in being supplied with items to help prevent such outbreaks again. The photo below shows Valina Bowman Burns, whose idea it was to bring in Hazel, with some of the new conservation items. She was supported by Museum Officers Michelle Savage and Hazel Sacco. 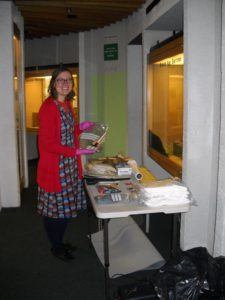 New conservation equipment for the Museum

Thanks to backing by Valina’s boss, Stephen Taylor, this has been possible and our museum will be better for it.  Thanks also to Land of the Fanns – without whom none of this would have been possible.