This month (April, 2018) saw the publication of Rosemary O’Day’s magnificent (if expensive) account of the Temple family of Stowe (An Elite Family in Early Modern England, Boydell Press). The book focuses on Sir Thomas Temple and his wife, Dame Hester, but, having been born at Stowe, Sir Alexander Temple of Chadwell is one of the minor characters. Sir Alexander’s children – James, John and Susan – appear only in a pedigree, but his stepson, Thomas (later Sir Thomas) Penistone has a more significant role, having married Sir Thomas Temple’s daughter, Martha.
Sir Thomas Penistone, was already studying at Oxford when, in 1607, Sir Alexander acquired Chadwell Place (also known as Longhouse Place – the source of the Chadwell street name, Longhouse Road). However, he was very likely to have visited Chadwell regularly, since Sir Alexander was his legal guardian as well as his step-father. A rather young Thomas appears alongside his mother in a portrait that currently hangs in Leeds Castle. O’Day notes (p. 254) that in 1610 (when he was 19, and not yet of full age), he accompanied his step-father on a visit to Sir Arthur Throckmorton. He married Martha Temple the following year. Martha “was venerated as a saint and a beauty … she was not as virtuous as her tomb suggests” (p. 36) 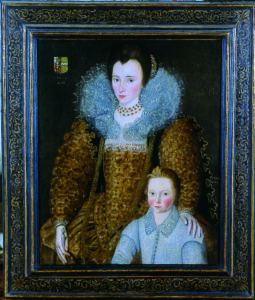 Sir Thomas Penistone was among a large number of gentleman in the retinue of the third Earl of Dorset – “one of the seventeenth century’s most accomplished gamblers and wastrels” according to Robert Cooper in The Literary Guide and Companion to Southern England (Ohio University Press, 1998). O’Day chronicles the ensuing affair between the Earl and Martha using Temple family sources as well as the diary of Anne Clifford, the Earl’s wife. The family appear to have turned a blind eye to this liaison. The affair ended in January 1619/20, when Martha was taken ill while at the house of Sir William Andrews (the husband of her sister Anne). She was taken to Stowe, but “my sister Penistone dyed at Stowe of the small pockes upon Friday night about 11 or 12 of the clock, being 14th January”.(p. 270) Sir Thomas Penistone remarried, but continued on good terms with his step family, and in 1633, his step-sister, Susan (who grew up in Chadwell), chose him rather than her brother James as a trustee for her marriage settlement when she married Sir Martin Lister.

O’Day’s book is a tour de force, combining the use of the extensive Temple archive in the Huntington Library in California with documents from numerous record offices in the UK. The specific details of the life of Sir Thomas and Dame Hester are used to illustrate and comment on social and political issues of much wider relevance. At £75, it is good value but not cheap and it will not be an automatic purchase for its Thurrock local history content. However, it is essential reading for any student of the period.