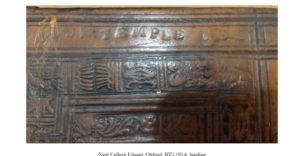 Chadwell’s Sir Alexander Temple was an educated man. He was literate, conducting business and personal correspondence and he spent some time studying at Lincoln’s Inn. However, unlike his brother who graduated from Oxford, Sir Alexander was not listed in the standard reference works as attending either of the ancient universities.

However, evidence from a book donated to an Oxford college library has recently come to light that suggests he may have atended New College, although he probably didn’t graduate. There are more details in the 11th edition of New College Notes .